Open Letter: The Russian interference in Belarus is happening now 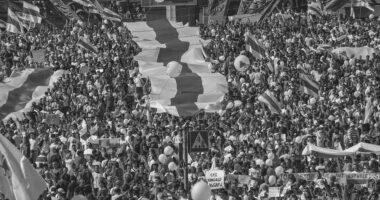 It was obvious from the beginning that the question is not whether the Kremlin would interfere in the Belarus revolution, but  how.  It is already clear that there is extensive Russian interference, both overt and semi-covert, in the events underway in Belarus, directed  by the highest levels in the Kremlin and executed mostly by the FSB and the so-called Russian National Guard.

On Tuesday, August 18, at night, an FSB aircraft —Tu-214PU, the same plane that FSB director Alexander Bortnikov used to fly to Washington in 2015 —  flew from Moscow to Minsk, bringing with it a high-level FSB team. In subsequent days, additional planes have arrived carrying personnel and equipment from the Russian National Guard.    On Wednesday, the security teams at KGB facilities across Belarus were reinforced. Having received the moral boost from Russian siloviki, various Belarusian security services  began a new wave of targeted attacks against smaller opposition rallies, as well as the covert arrests of activists. According to opposition reports, at least 33 people have gone missing since the reinforcements arrived, all of them last seen either at rallies or in police vans. OMON (special police) and other law enforcement elements  are patrolling  Minsk and other major cities.

On Wednesday, August 19, Russian “experts” arrived at the State TV of Belarus; broadcasts are now run by them. These broadcasts include anti-opposition ads that are reminiscent of Russian anti-western propaganda, highlighting themes about the protesters bringing crime and chaos. Belarusian journalists and reporters who went on strike from the state broadcaster  have not been allowed back into the building. Western journalists are being banned from the country, and internet traffic has been disrupted since before the election.

An aggressive campaign to discredit the opposition and present a distorted  picture of their goals has sprung up on social media, and is spread via other assets in Belarus — claims that the opposition is financed by the West; that the opposition leaders are Polish, Lithuanian, or American agents; that the opposition wants to drag Belarus away from Russia. All of this is in stark contrast to the inherently non-geopolitical nature of the messaging from the demonstrators and the opposition. For now, the opposition remains focused on having a clean, free, and fair election. Lukashenka’s rhetoric shows he has no intention to engage in any dialogue with protest leaders or meet any opposition demands. Instead, he has issued arrest warrants   for the Opposition Coordination Council.

Well-orchestrated pro-government rallies, small in numbers but visually effective, have started to fly Russian flags next to the flag of independent  Belarus. None of these methods come as a surprise. By now, we know these tactics well. Security forces are used to remove threats and regain control, and operations in the information domain are used to project narrative and create pretext and justification for the actions of the security services. This Kremlin playbook is tried and true. It is explicitly designed to muddle perceptions of events on the ground and delay whatever consequences may be levied against Lukashenka and his government for their crackdown on the opposition and peaceful demonstrations.

There is enough indication that operational control of  security services in Belarus is now in the hands  of Russian operatives that Western friends of Belarus should be concerned about its ongoing independence. By making a deal with Moscow to retain control of Belarus, Lukashenka may be signing away the future of the nation. The Kremlin’s malign interference in Belarus is well underway. The public needs to know about it, and needs clarity on what is happening to counter the Kremlin’s attempts to manipulate perception of events. The EU and European governments and agencies should publicly communicate an accurate picture of the situation on the ground in Belarus, and use this information to form a strategy to engage Belarus and deter the worst consequences of the pathway currently taken. The people of Belarus have shown that they are willing to do the work to build a stronger, more democratic nation that can determine its own future. It is the duty of Western democracies and the European Union to help them in this effort.